About 80 Calgary climate change activists boarded two buses at North Hill Centre on Friday for a three-hour ride to join 16-year-old Swedish activist Greta Thunberg for a march and rally at the Alberta Legislature. 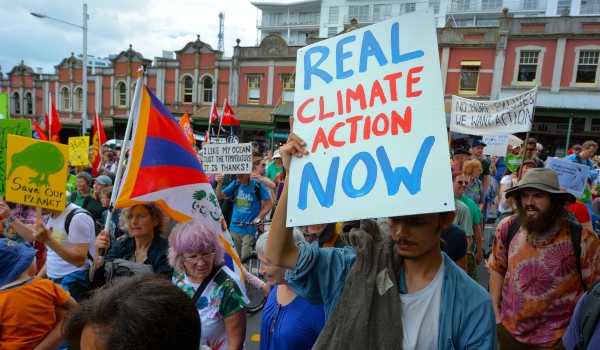 —
About 80 Calgary climate change activists boarded two buses at North Hill Centre on Friday for a three-hour ride to join 16-year-old Swedish activist Greta Thunberg for a march and rally at the Alberta Legislature.

Ten-year-old Teo Lee-Tibbals, travelling with his mother, said he couldn’t wait to take part in the climate strike to demand action on the climate crisis.

“I am here to get on that bus that is leaving quite early in the morning, head to Edmonton — which is where Greta Thunberg is — and help save the world,” Lee-Tibbals said.

Climate Justice Edmonton, who organized Friday’s rally, said in a release that over 1,000 people are expected to march down Jasper Avenue from Bear Hills Park, before gathering at the Alberta Legislature.

Priya Migneault, 15, who boarded one of the Calgary buses, called Greta a hero whom she would love to meet.

She added that she doesn’t think oil and gas advocates are “the enemy.”

“I definitely think they are expressing their opinions. I just don’t want [Greta] to feel she is alone in this fight for climate action in Alberta,” Migneault said.

Dr. Joe Vipond of Canadian Association of Physicians for the Environment is also a member of Calgary Climate Hub, which organized the pilgrimage to Edmonton.

He said it was important that Calgary had a voice at Friday’s event.

“If not us who? This is a world-wide problem, right? This is the joy of a collective action problem — everybody has got to step up and be a part,” Vipond said.

“We are not playing our role right now,” he added. “We have cancelled most of our climate policies in this province. It’s not going to serve us well as the world starts to transition and we say, ‘No we are not going there.’ I don’t see how that will benefit our province.”

This post was previously published on ecowatch.news and is republished here under a Creative Commons license CC BY-ND 4.0.

If you believe in the work we are doing here at The Good Men Project and want to join our calls on a regular basis, please join us as a Premium Member, today.

All Premium Members get to view The Good Men Project with NO ADS.

Need more info? A complete list of benefits is here.